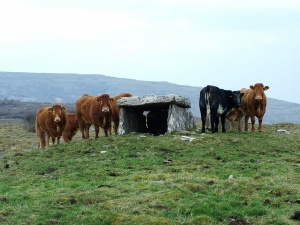 The Burren has a long and proud history of farming. The iconic Poulnabrone dolmen, in the central Burren, is now recognised as having been built by some of Ireland’s very first farmers some 5,800 years ago. Evidence from excavations showed that these tomb-builders kept cattle, sheep and goats, as well as growing grain crops. Since these Stone Age beginings, Burren farmers have proceeded, over time, to not merely adapt to, and survive, on the ‘fertile rock’, but they have shaped the landscape of the Burren in a very profound and arguably positive manner. Today, several hundred farm families continue to live and farm in the Burren, producing excellent livestock while sustaining Ireland’s greatest heritage landscape.

The Burren is very much a ‘pastoral’ landscape where it is said ‘the cowman, not the ploughman, is king’. Cattle, sheep and goats would historically have been the mainstay of the Burren farmer. Today, most Burren farmers keep ‘suckler cows’ — 30–40 would be an average herd size — with the young calves sold at around 9 months of age for breeding (females) or for fattening for beef (males). While income is low, so too are costs, as typically farmers keep their cattle on the hills during winter which cuts down on housing and feeding costs. 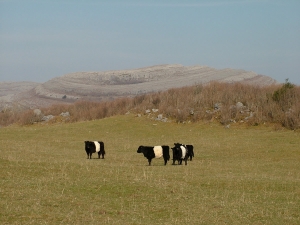 Burren farmers, like their counterparts elsewhere, have become increasingly specialised in recent years. Most farmers keep a herd of suckler cows dominated by continental breeds (Charolais, Simmental, Limousin are popular). Calving takes place around February–April, toward the end of the winter period. These cattle are kept on fertile lowland grasslands during summer before the calves are weaned, fattened and sold (usually at the local mart), with the in-calf mothers heading back onto the Burren hills in October onwards for another winter. Some silage or hay may be saved during summer to be used as supplementary winter feeding (on the winterage or inside ‘slatted’ houses).

In general, income from farming is insufficient to support the farm family, so most farm families only earn part of their income on-farm. Labour and succession are real issues in the Burren. The introduction of Agri-environmental programmes such as GLAS, and Burren Programme, offer important supports while helping farmers to continue farming in an appropriate way to sustain the Burren’s environment. For more, see burrenbeo.com.