The Burren (from the Gaelic word Boireann, ‘place of stone’) is a very distinctive limestone landscape which extends over roughly 720km2 of north Co. Clare and south Co. Galway along Ireland’s mid-western coast. It is a refuge for a great many plant and animal species which are now rare elsewhere in Ireland and Europe, and also boasts a fascinating archaeological record which maps over 5,500 years of human endeavour on what is sometimes referred to as ‘the fertile rock’. Though largely privately owned, the Burren and its rich and varied heritage represent a public resource of inestimable value. 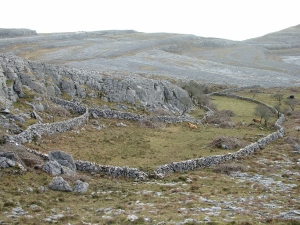 Farming is integral to the character and composition of the Burren. The ancient transhumance practice of winter grazing on the rough limestone grasslands and heaths is central to the health and diversity of the many species and habitats therein. In a similar way, much of the Burren’s archaeological and geological heritage can be directly linked to the work of generations of farmers.

Today, several hundred farm families continue to live and farm in the Burren despite the challenges posed in an era of efficiency-driven farming and by the rough, unforgiving terrain. These farm families produce excellent livestock as did their forefathers, and in many cases this is achieved using the same ancient pastoral traditions. Crucially, they also hold the key to the future wellbeing of the Burren.

Burren Programme is a locally targeted conservation programme which invests in these Burren farmers, their land and livestock. It works closely with them to optimise their farming systems so they can continue to produce high quality agricultural goods from an outstanding environment.

From BurrenLIFE Project to Burren Farming for Conservation Programme (BFCP)

We wish to take this opportunity to thank former members of the BurrenLIFE Project and BFCP including James Moran, Ruairí Ó Conchúir, Aisling Keane, Grace O’Donovan, Sarah O’Louglin Irwin, Rachael Barrett and Caitriona Maher for all their hard work and contribution.