The actions supported by Burren Programme vary from farm to farm and from year to year, allowing the farmer the flexibility to tailor these actions to the needs of his/her farm at that point in time. The works undertaken on any farm are nominated by the farmer in conjunction with his trained farm advisor, who then proceeds to ‘map’ these actions and allocate a cost for each one. These proposed actions are then assessed by the Burren  team on the basis of their environmental benefit and their ‘value for money’, while also ensuring all required permissions have been secured. All works are co-funded by the farmer – the level of co-funding is based on the environmental benefit generated – and carried out by the farmer and/or contractors before payment issues.

Some of the main works funded through Burren Programme are listed below.   A full listing of works carried out, each year, during the programme, can be found under Resources/Annual Report. 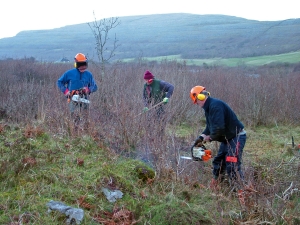 Hazel and blackthorn scrub is a natural part of the Burren landscape. However, due to a number of complex reasons, including changes in farming practices, reduction in human use of scrub and changes in weather patterns, this scrub is now spreading at an unprecedented rate on to the Burren’s orchid-rich grasslands. This results in a loss of this rare habitat and a threat to the region’s archaeology, while also limiting access for people and livestock.

With support from Burren Programme (75% co-funding), farmers have removed 87ha of encroaching scrub and opened up 40km of 3-4m wide access pathways through the scrub.  In fact 66% of I-2 budget has been spent on scrub work. This slow, tedious, difficult work has been done mostly using hand tools and has required a BP investment of €470k, greatly improving the habitats and management systems of many farms (data, March 2020). 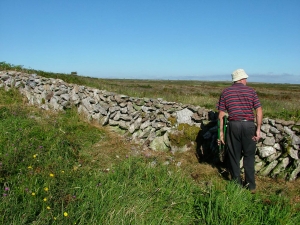 The stone walls of the Burren are probably its most defining cultural feature, while also being crucial in the management of the farms. Burren Programme funds the repair of internal stone walls as this contributes to more targeted grazing and more efficient herding, and greatly improves the visual appearance of the landscape. Burren Programme farmers have repaired, to date, 9,000m of broken wall, as well as fixing 9km of wire fencing (mostly on green land, to separate summer land from winterage). BP invested €84,000 in this work, to date (data, March 2020). 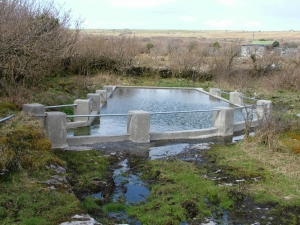 One of the main objectives of the Burren Programme is to ‘contribute to improvements in water quality and water usage efficiency in the Burren region’. The provision of a clean supply of fresh drinking water for livestock is critical for the targeted grazing of Burren winterages, while clean water benefits everyone in the local community. Existing water supplies – mainly weak springs – are often insufficient to meet livestock needs, and are very prone to pollution from overuse by livestock. This is tackled in one of two ways: piping water away from springs to a storage facility and on to drinking troughs or fencing off the springs and installing rainwater harvesters instead. The springs are kept clean, and pollution-free and therefore the water quality of the Burren improved.   BP have invested over €51,000 (data, March 2020) in improving water provision in the Burren, and this funding has been matched by BP farmers.

Given that many Burren farmers now have off-farm jobs, and given the rough, extensive nature of Burren farms, the provision of vehicular access tracks to enable farmers to herd livestock more efficiently is a high priority for many farmers. This is a very sensitive issue however as tracks may result in damage to priority habitats. Burren Programme works closely with farmers and conservation authorities to plan access routes where appropriate and justified, and works to ensure these tracks do the least possible damage to habitats and archaeology. A well built track can greatly improve site management and provide a very positive investment to ensure the ongoing management of areas which are otherwise at the risk of partial or total abandonment. Many such tracks may also enhance the experience of visitors as they hike through the Burren. BP have invested, to date, €40,000 (matched by 120k from farmers) in 10km of tracks; some are new tracks, while others are upgrade works on existing tracks (data, march 2020). 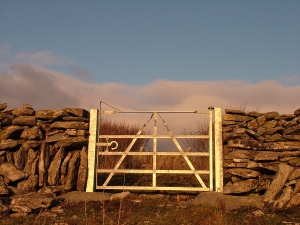 Gates are important, functional items on Burren farms, enabling better grazing and easier herding. The use of timber pallets and other materials to block gaps is unsightly, particularly when compared to a nice, traditional gate. BP invested €25k in the installation of 121 new gates in the Burren, including 44 locally manufactured traditional Burren gates which fit very well with the local stone walls. Farmers fund 75-50% of the cost of these gates (data, March 2020).

Over the past few decades, most Irish farmers harvest silage every year to feed their livestock over winter. Silage, when fed excessively on Burren winterages, can cause many problems including water pollution and soil damage, as well as contributing to a shift in the local ecology and the encroachment of scrub. However, outwintering livestock do need supplementary nutrition, so under the Burren LIFE research project, a concentrate ration was developed to meet the animal’s nutritional needs while increasing uptake of rough forage.   For an updated list of suppliers of the BurrenLIFE Ration please visit our Resources page.  To encourage farmers to move from silage to ration feeding, BP has paid €12k to farmers to purchase 61 feed bins and silos to store feed and 61 feed troughs to distribute it to livestock (data, March 2020). This has contributed to the cessation of silage feeding on many winterages and a consequent improvement in water quality, soil and habitat health.

Many of the Burren’s habitats are sensitive to a number of threats, including pollution by livestock, fly-tipping of rubbish and natural incursion of unwanted species such as bracken. Farmers who wish to address some of these threats and restore damaged habitats may avail of Burren Programme funding (up to 75%) and  €12k (data, March 2020) has been invested in such works as bracken control, rubbish removal, the cleaning out and walling-off of sensitive springs.