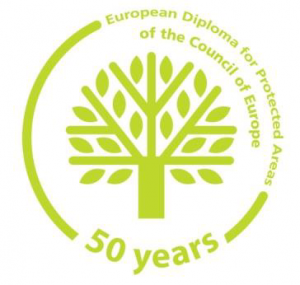 The European Diploma for Protected Areas is a prestigious international award granted since 1965 by the Committee of Ministers of the Council of Europe.  It recognises natural and semi-natural areas and landscapes of exceptional European importance for the preservation of biological, geological and landscape diversity and which are managed in an exemplary way. Protected areas may receive the diploma for their outstanding scientific, cultural or aesthetic qualities, but they must also be the subject of a suitable conservation scheme. Since its creation in 1965, 74 protected areas have been granted the European Diploma (see full list). They are located in 29 European countries, both member and non-member states of the Council of Europe.

The Burren Region receives the EDPA

In 2013, The Burren Region (Ireland) became the 72nd area to receive the European Diploma for Protected Areas.  The award was presented by Professor Michael Usher, Chairman of the Group of Specialists for the European Diploma of Protected Areas to the then Minister for Arts, Heritage and the Gealtacht, Minister Jimmy Deenihan, on behalf of the people of the Burren, in 2014.

The award of the EDPA to the Burren in 2014. Michael Usher presents the EDPA to Minister Jimmy Deenihan of the Dept. of Arts, Heritage and the Gaeltacht.

In celebration of the 50th birthday of the European Diploma for Protected Areas, a number of events took place in the Burren, Ireland’s only EDPA site, during 2015, including the Burren in Bloom Festival which was held between April 30th and May 18th, celebrating the rich and diverse natural heritage of the Burren.   The Burren Winterage Weekend took place from October 22nd to October 25th.   This festival celebrated by the Burren farming community, highlighted the winterage tradition which has been part of the Burren for centuries.  A re-enactment of this tradition, bringing the cattle up to the winterage pastures, at the end of October, for the winter months, took place on the Sunday, with the whole community walking with the farmer to herd the cattle up to the Burren hills.  Burrenbeo Trust continue to hold events, walks and talks and landscape symposiums, sharing the beauty of the Burren and celebrating with the people of the Burren and visitors to the area.

An international tool to help management and conservation of protected areas

The award of the European Diploma provides an invaluable stimulus for the efficient protection and management of landscapes, reserves or natural monuments and sites with special European significance.

For the authorities responsible for protected areas, the award of the European Diploma represent an additional international tool which, under Council of Europe auspices, enhance their management and conservation efforts. The unique nature of the Diploma also lies in the fact that it is awarded for a limited duration; the threat that it may be withdrawn has a deterrent effect in respect of dangers liable to cause harm to the area and acts as a stimulus for the preservation and improvement of the site.  With this in mind, we at Burren Programme, strive to conserve the managed and living landscape that is the Burren, and work with the farming community, and local groups such as Burrenbeo Trust and many authorities including NPWS and Department of Agriculture,  to proudly hold on to this auspicious award.

Visit European Diploma for Protected Areas and the Bern Convention , the legal instrument behind the award, for more information.