Tourists will this weekend be able to walk in the footsteps of Prince Charles, who made a historic a visit to County Clare last month.

Organised on land owned and farmed by longstanding Corofin family Pat and Oliver Nagle, the walk was deemed a resounding success and brought national and international positive exposure to the Burren.

“If this initial walk is successful a series of further Sunday walks will be organised,” explained Martin Waldron of Corofin Tourism Association, which was reformed in 2012 to develop Corofin and the Burren region surrounding Corofin as a tourist destination.

“As a follow up to the walk, Oliver and Pat Nagle (via Colette Nagle of Cumann Suiladoiri) have approached Corofin Tourism Association with a view to promoting Corofin and bringing people together for a walk on their farm,” he stated.

Mr. Waldron, who is also North Clare Representative for Clare Tourism, continued: “The walk will take approximately two hours and will include retracing the Princes Walk, and a tour of more than a dozen recently uncovered monuments and an old farmstead on the land, plus the flora and fauna of the land. The first part of the tour is on gentle rising ground, the second part of the tour is on heavier gradient of Sliabh Carron.” 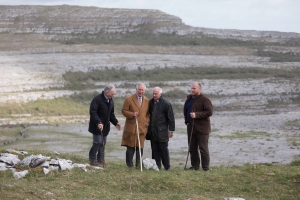 People are asked to meet at the new An Cupan Tae Cafe on Main Street, Corofin, before 1pm, for a 1.15pm depart. The Group will return to Corofin after 5pm and the bus will drop at Bofey Quinns Restaurant on Main Street for refreshments, where Trish and Niall will have a walkers rate for food.

Booking is essential and only via Martin Waldron from Corofin Tourism on 087 2836296. Space is limited to 26 persons on bus and there is no charge for this first walk. Good walking footwear recommended. Appropriate clothing and water should be carried.